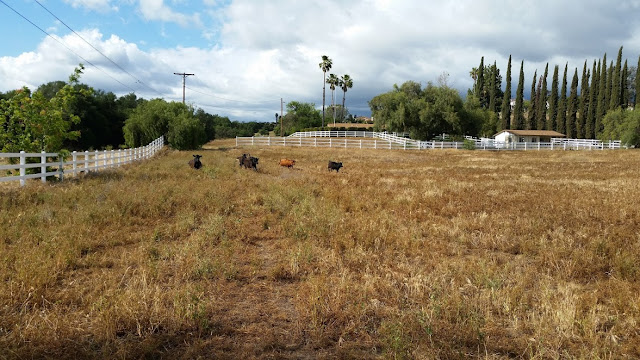 The cows spent the summer at our neighbors munching down his 8 acres of weeds.  We brought them home last weekend and so instead of giving 9 cattle 3 flakes a day, just so they know who their parents are, we went up to 1 bale of hay a day. 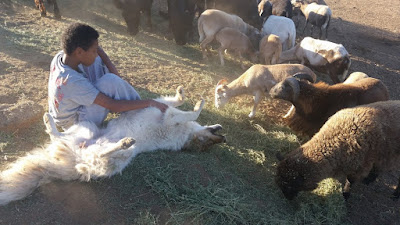 The sheep had to get used to sharing space with the cattle and figure out how to get around the electric fence now that it's charged.  One of the steers is a real dummy I have decided to name  him Next!  He wandered under the fence the same place the sheep go under and then wandered the property mooing the other cattle would answer him and he wouldn't go to them he just kept mooing like he was lost and no one answered him.  Normally I just open the gate and the cattle that are out just walk right in.  Not Next, he charges the fence on both sides of the gate.  I end up letting out a cow to show Next how to walk through the gate. 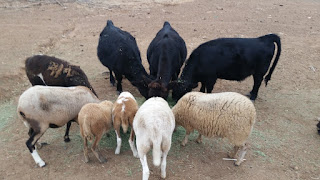 Next isn't in this picture.

Next has decided he will not share hay with the sheep so he gets food protective and pushes the lambs away. 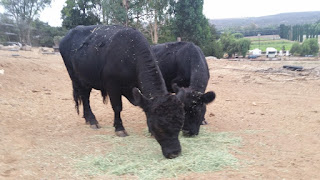 He isn't a fan of sharing with the other cattle either he wanders from flake of hay to flake of hay any time another cow joins him at his flake. 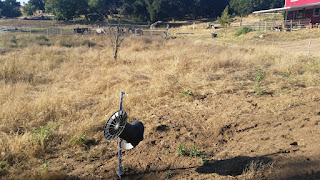 Today we moved the cattle to another neighbor's flower field.  Stick Boy and I set up the temporary
electric fencing in the space the neighbor wants cleared.  We made a narrow ally for the cattle to walk from our property to the neighbor's field without eating of the flowers that are currently growing.  I was so confident that this would work I didn't even wait for Darling Husband or College Boy to come home.  Instead Stick Boy and I got the help of 4 neighbor boys 6-10 years old only 2 speak any English.  What can go wrong?

I get some hay and convince the cattle to follow me from one end of our pasture to the other and part way to the gate to the neighbors.  About half way to the gate the older cows that have been on this trip the last 3 years saw where we wanted them to go and took off running.  The snapping of the electric fence and those brave boys kept the wonderful girls in the ally I exactly how I wanted them to go.  The bull wasn't as sure of this adventure so was a little slower. 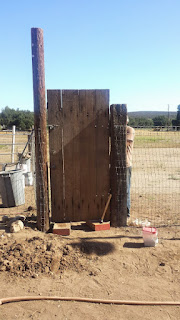 The gate all the cattle needed to go through.

Just as Mooney, the bull, starts to go through the gate Next freaks out and pushes Mooney so he goes to the left of the gate and around the corner.  Next careens along the fence line not even looking at the tree he almost crashes into.  Mooney runs frantically at the fence crashing into it then he joins Next.  They start running up and down the lower fence but never going as far as the gate.  I work my way around the foolish animals and convince them to go toward the gate. 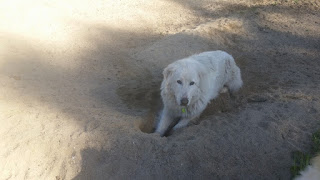 Just as Mooney starts to look at the gate and start waking that way calmly, Next decides to chase Luca, who until this point had been a good dog and watched the craziness without adding to it.  Now Luca starts barking at the completely confused cattle and they all run the whole length of the bottom of our fence two times before I convince Luca he isn't helping.  I get the boys to stand along one side of the gate and Teen Daughter comes to help me calmly walk Mooney and Next toward the gate. 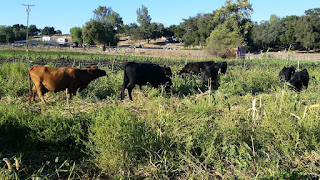 The boys worked perfectly moving just enough to convince the steer and bull to look at the gate where the rest of their herd was happily eating. 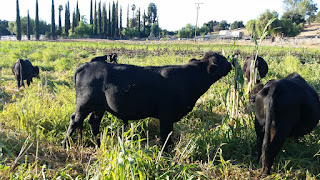 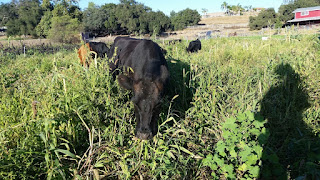 Posted by Unknown at 9:14 PM No comments: