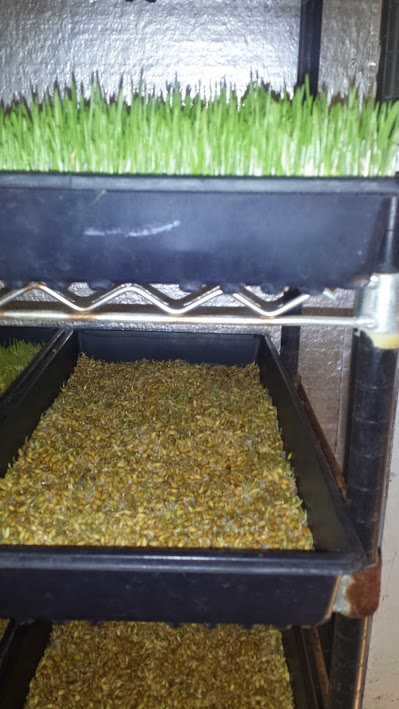 We (Darling Husband) insulated the fodder room and installed an a/c dehumidifier unit.  He also set up an air bubbler and new seed soaking tub.  It is a work in progress and he plans on redoing some things this weekend.  The fodder is growing so much better and we have only had 2 spots of mold (yesterday) in the months that we have been doing this. A few weeks ago we had record heat that the little A/C unit couldn't keep up with so the fodder room got to over 85 three days a few weeks ago - but this was not when we had the mold.


Last year we had mostly success with growing the fodder but since the fodder room would get up to 110 we were in a constant battle with mold. 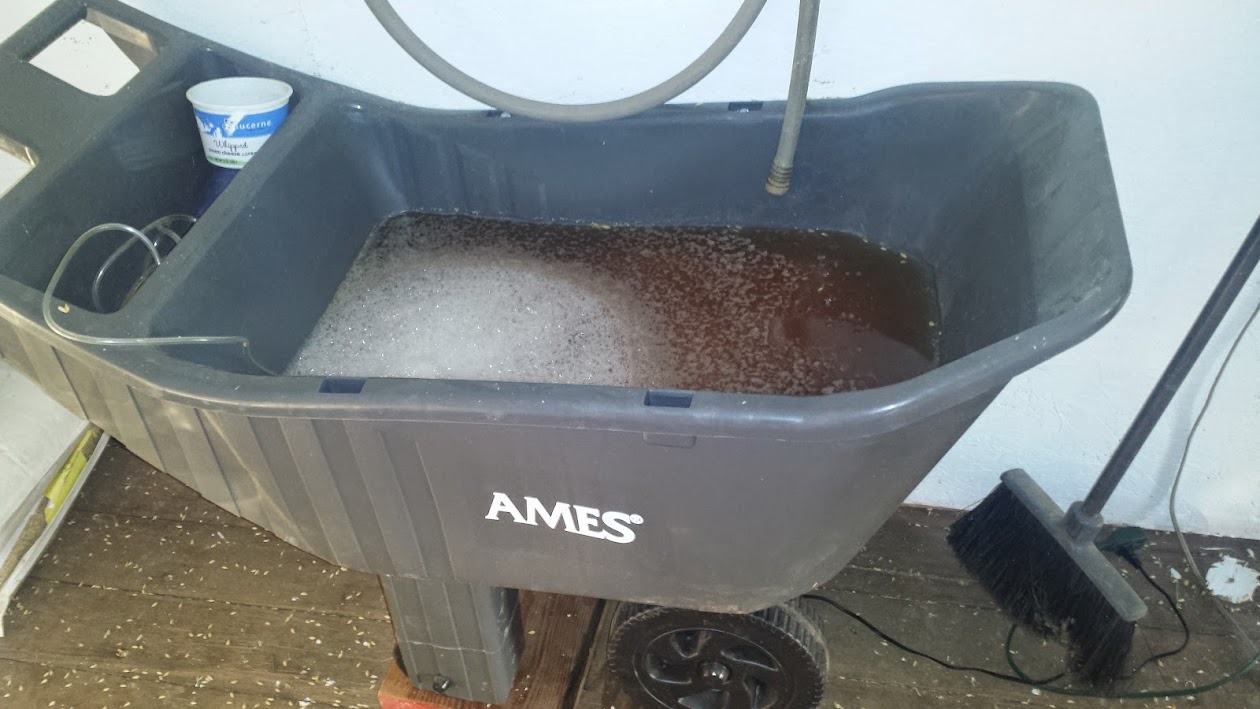 We start with soaking the seeds for 12 to 24 hours.  The seeds soak in water with an air stone. 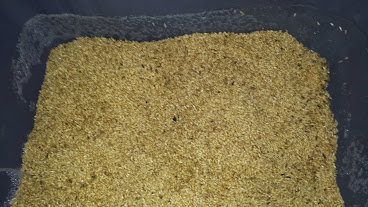 We drain and rinse the seeds. 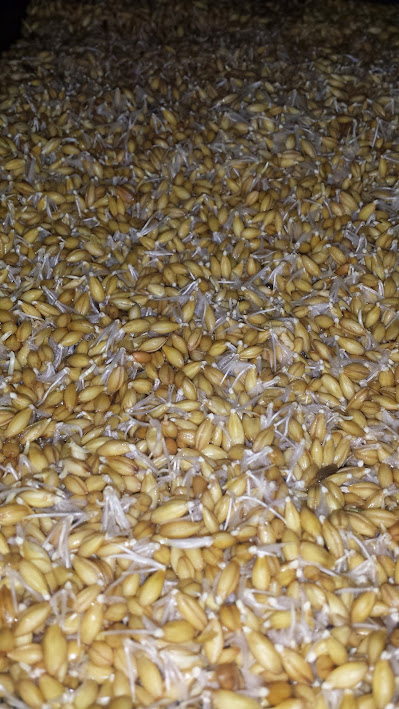 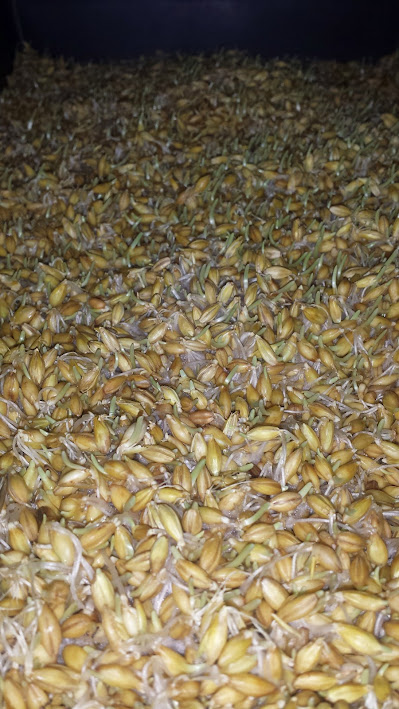 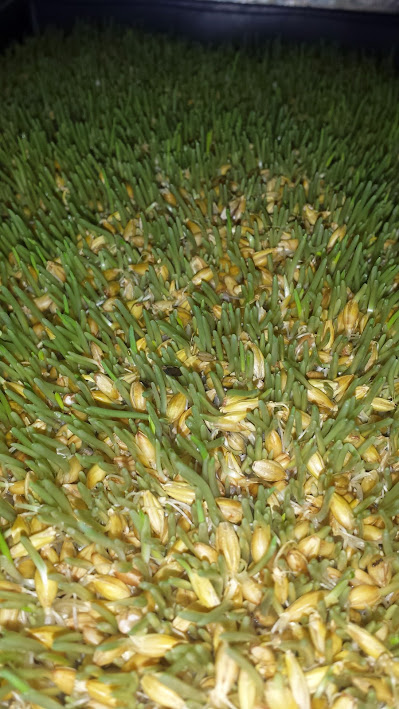 The third day we have lots of nice sprouts. 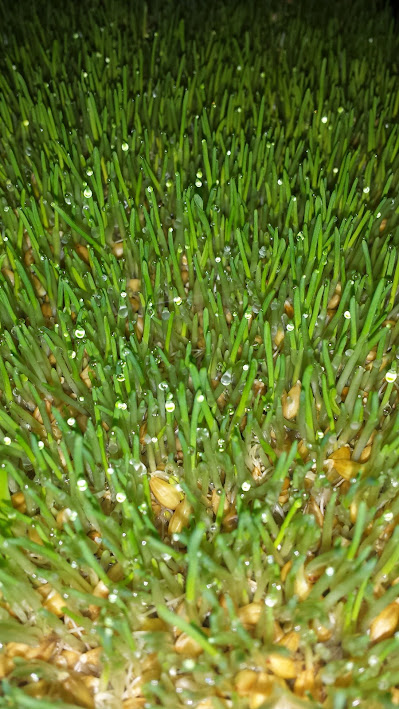 On the fourth day we have a lot the fodder to a point where we were sometimes feeding this winter.   Somehow I skipped the 5th day 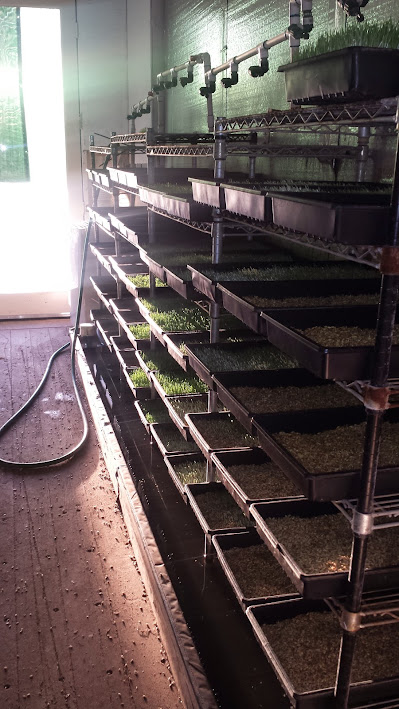 The top shelf gets the most light so every day I move the next days fodder to the top shelf. We have 12 trays across and 6 going down.  So 72 trays are always growing.

Here it is getting ready for me to rip it up and put it into 5 gallon paint buckets to carry to the cattle.  The sheep get 1/2 tray as a reward for going into their pen at night.  The chicken get any unsprouted seeds.  The biggest problem at this point is I hate having a pool under all the shelving.  If I had it to do over again we would have the water going into a drain.  I think we are using about 55 to 60 gallons of water each day.  The water goes out into the pasture and hopefully grass will start growing where the water flows.  Right now the cattle are eating it as fast as it grows.

Posted by Unknown at 6:02 PM No comments: 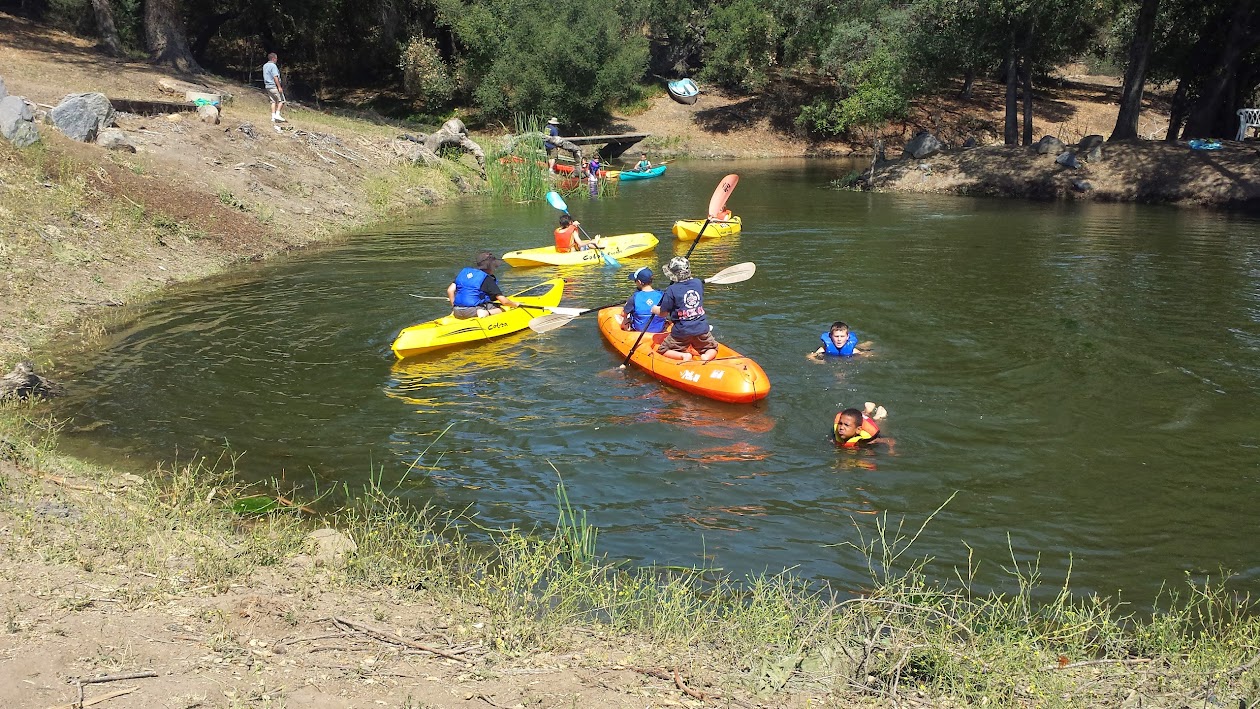 A wonderful friend came to help us get ready for the arrivals at 8:  The first father son group came right at 8 and threw in their fishing line and caught a 2 pound bass almost before the hook sank into the water.  Scout familys came and went through out the morning.  One Bear Scout claimed to have caught 18 blue gill and 3 bass – I did see him with at least 10 fish and weighed several for him. 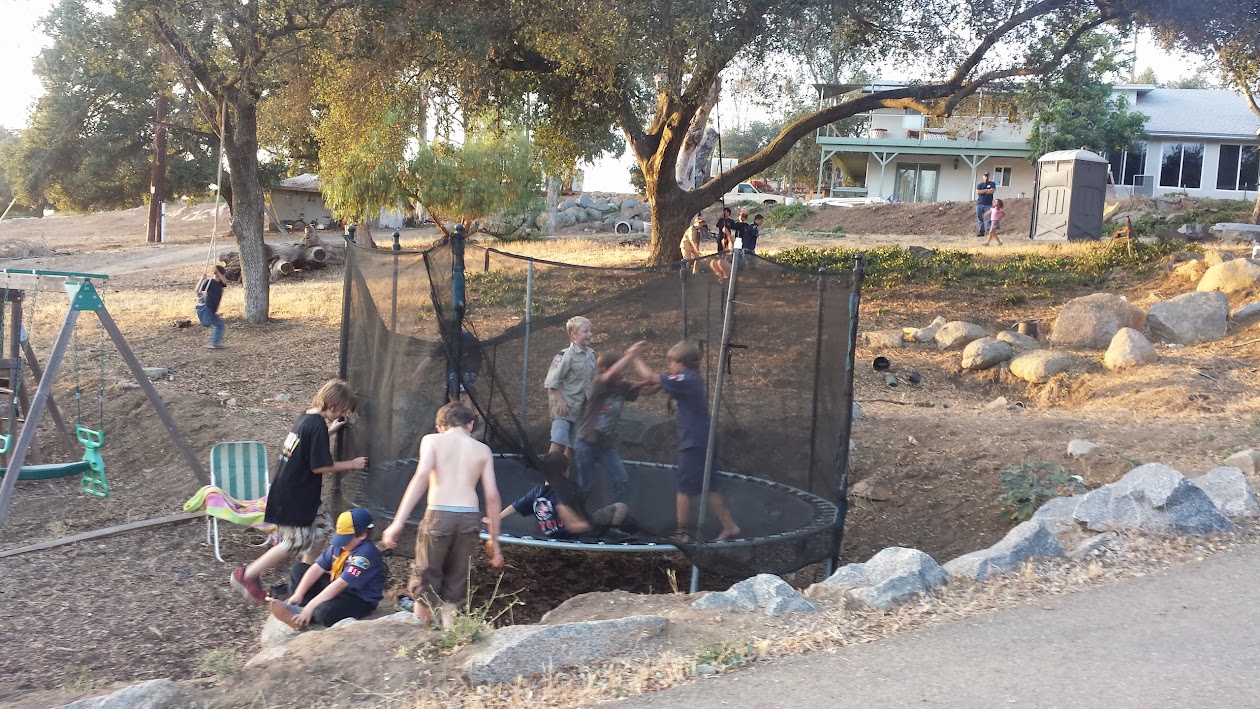 After fishing it was supposed to be lunch but the older boys wanted to swim, and most of the parents had left to go get lunch so we decided the scouts could all swim during lunch break.  At 1 as planned we got the kids out of the pond to play kick ball but it was hot.  20 minutes into the game the boys started asking for a water break, during that water break a few boys accidentally fell into the pond.  From then on there was no going back and we as adults decided to allow fishing on one side of the pond and swimming from the other.  We found Personal Flotation Devices for all the kids and made sure they fit the youngest swimmers.  Dinner happened at 7: and the evening didn’t end until after 9: 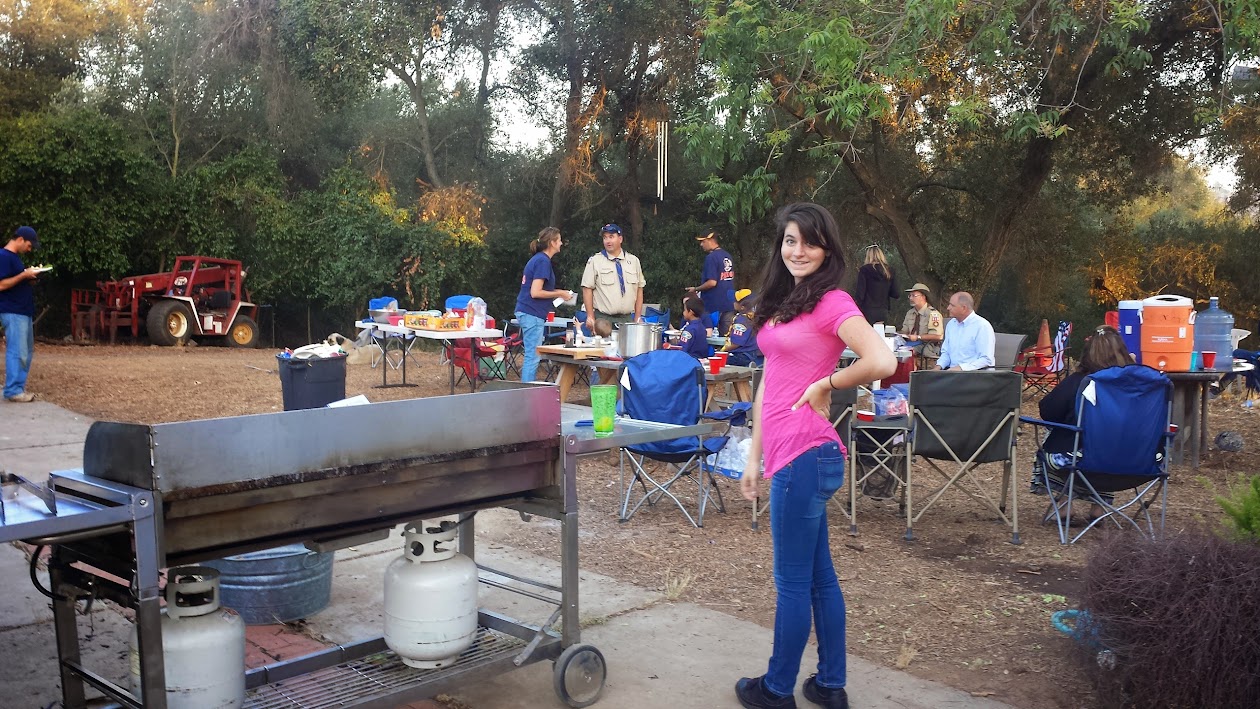 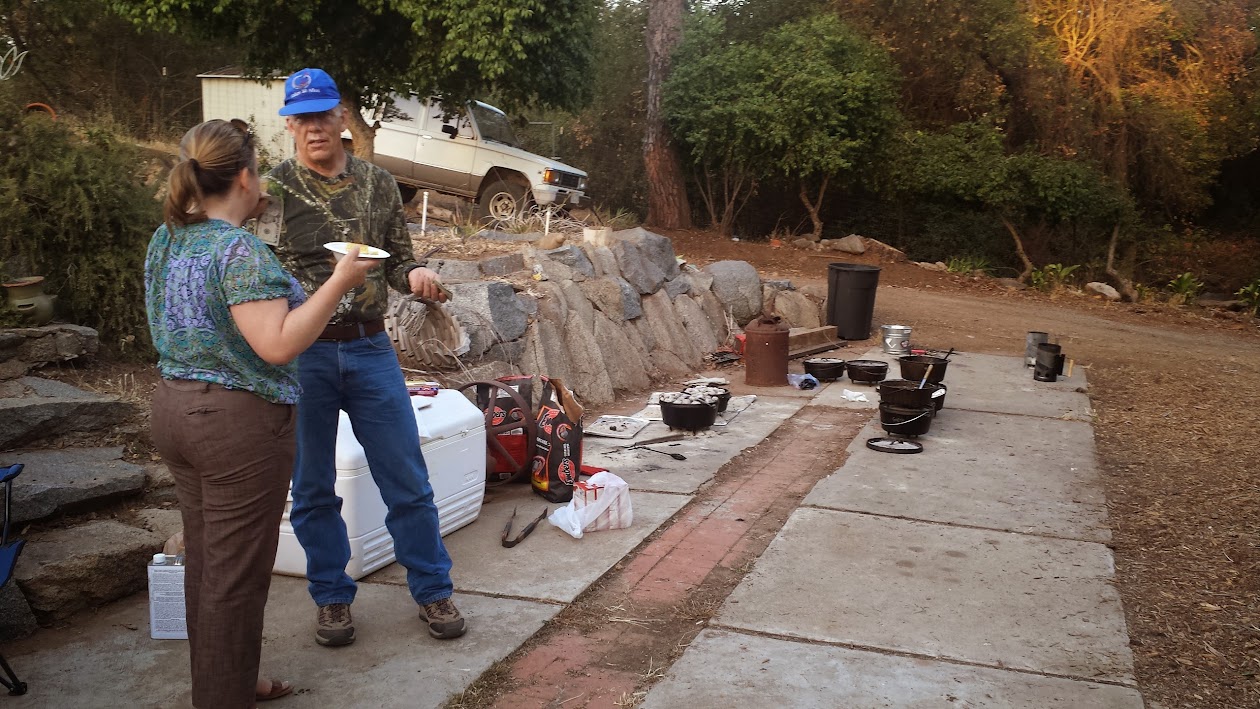 Look at all those dutch ovens!
Posted by Unknown at 5:00 AM No comments: 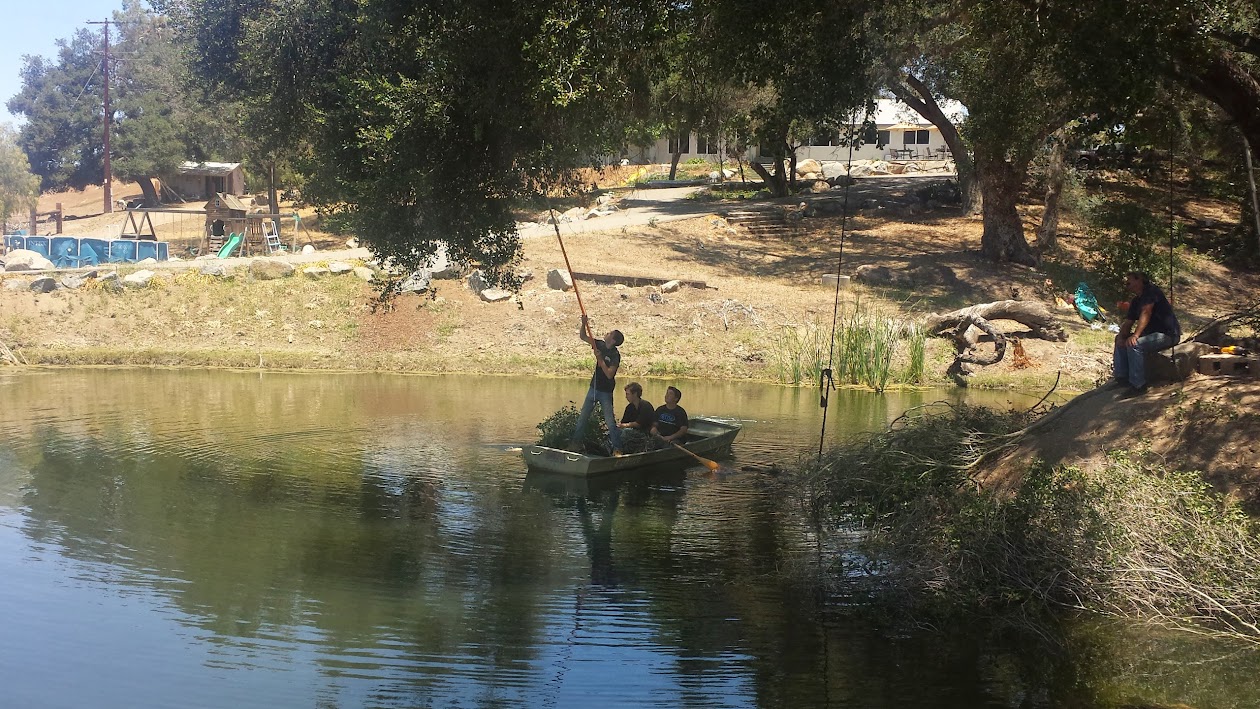 Our Cub Scout Pack asked if we would have the annual end of year party at our house.  They had had a Fishing Derby day at one of our local lakes and not one Cub Scout caught a fish. We agreed to the have the event at our house.  It was a well planned event with fishing from 8:am to 12: then an hour break for lunch and on to kick ball and other rotations.  Dinner was to be at 6: cooked by our New Boy Scout, Scout Master then on to the Cross Over event at 7: and everything would be over at 8. 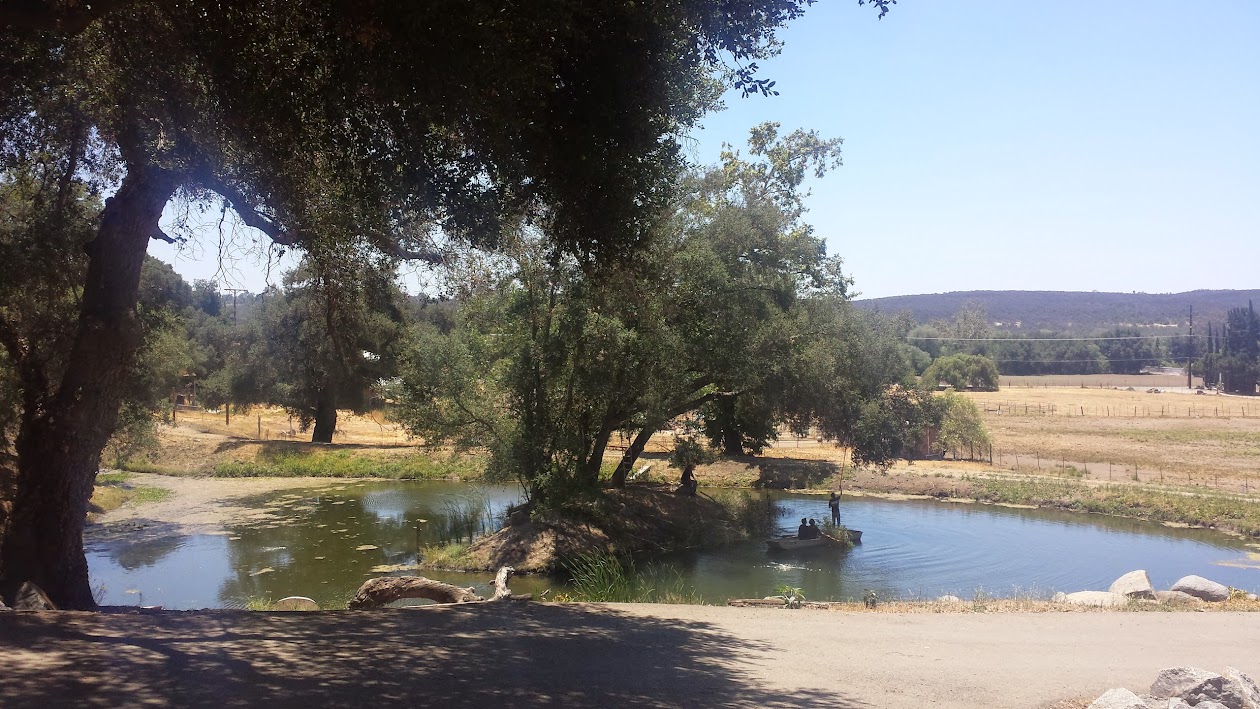 We spent the weekend/week before the event working on cleaning up the property. 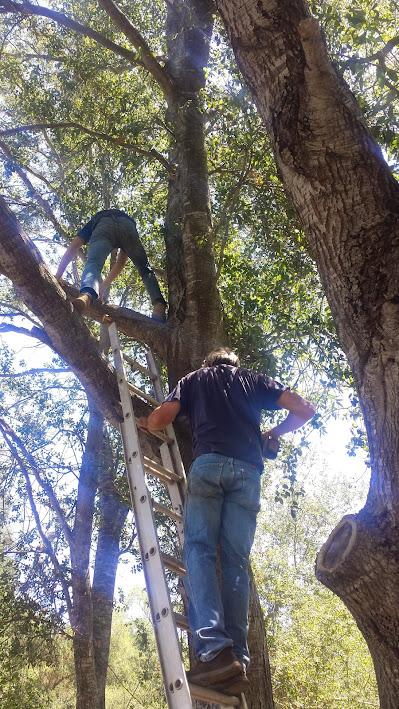 Fearless son offered to climb up the tree with the saw and cut the branches. 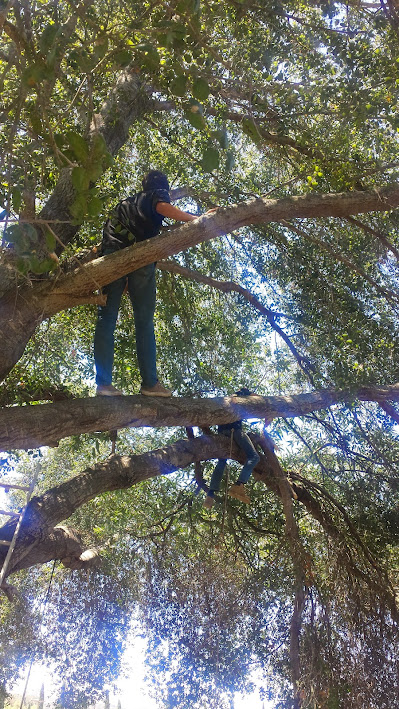 His friend thought it was fun so he climbed the tree next to the one Fearless Son was on. 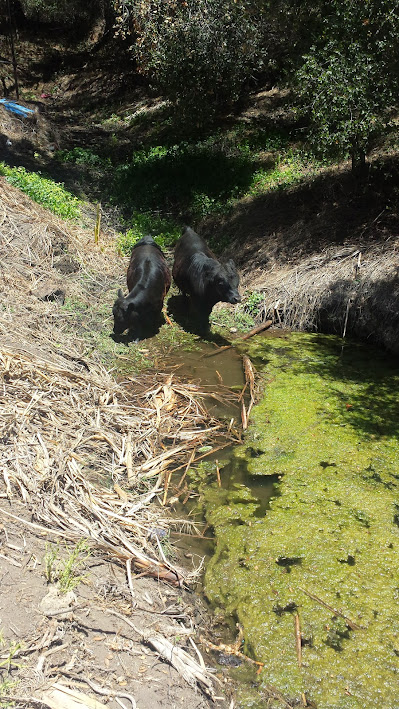 Even the cows helped clean up.