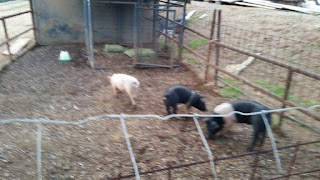 In November we sent the pigs to be processed.  I sold one for the cost of processing the one we wanted to eat, so we were able to put almost 200lbs of meat in the freezer for less than $2.00 a pound.  We are LOVING eating it but it is clear I did not get enough of it made into sausage.  We decided to buy 2 more pigs; one to sell and one to turn into sausage and bacon.
Yesterday Darling Husband, Stick Boy, and I went to pick out 2 pigs.  His friend took us to meet the woman he buys his pigs from.  I have never seen so many pigs, big happy pigs, adorable day old pigs, old sows with young piglets playing around them - it was so overwhelming I didn't take any pictures. 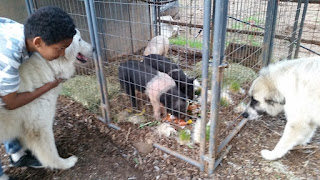 While we were there picking out or piglets to grow for sausage Darling Husband says lets start breeding pigs.  It's not in the plan but if you have read my blog you know not much of what we do is in the plan.  Sure lets breed pigs!  We chose 2 piglets that were not related and put them in the travel crate.  It is then I reminded Darling Husband that if we breed these we will not have any sausages for summer.  So we borrowed money from his friend and bought a third pig. 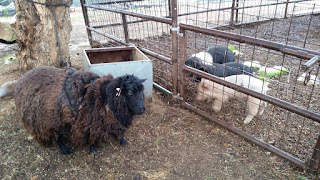 The piglets are checking out the sheep.  They kept running up to the fence.  Here is Maxwell wondering why the piggies get more fodder than she does.
Posted by Unknown at 12:41 PM No comments:

I have been avoiding my blog.  I know I have to write about this but it hurts my heart.  With farming and animals, crazy things happen and it just doesn't make any sense.  The new lambs were strange little guys it took a couple days before they would walk uneven ground without stopping to study it.  Looking back I should have kept the penned in an area with rocks but I am not sure that would have helped. 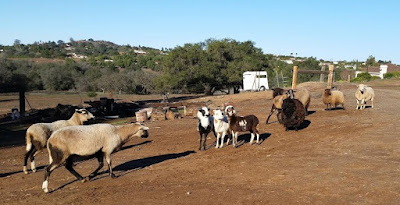 Here the Painted Desert Sheep are with the rest of our sheep but most of the time they would keep to themselves. 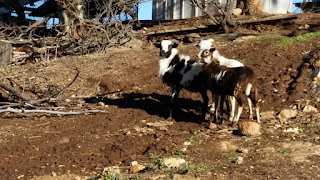 We went to dinner with at my kids grandparents and with the freedom of having HelpXer's here we were not worried about it getting dark while we enjoyed our family.  During dinner we got a call all animal lovers fear.  When the HelpXers came home they saw Oakley with something in the pond.  They thought she was attacking a duck but instead she was trying to pull the lamb out of the pond but the bank was too steep and she kept falling back in.  The HelpXers pulled the lamb out of the pond and warmed her by the fire. 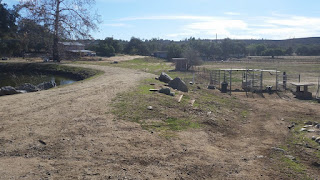 Then when the sheep were being put away another lamb ran up over the dam and right splash into the pond the lamb swam over to where the bank was super steep but thankfully our HelpXer was able to pull the lamb out quickly.
The drive home was me making calls to vets and other animal friends looking for advice and medicine.  The first vet I spoke with was unwilling to advise on sheep, the second would see us but not until the next day and didn't advise treating the lamb he wanted $250 just to see her. 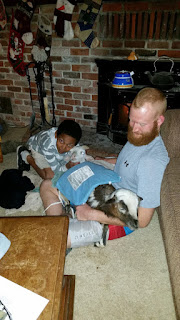 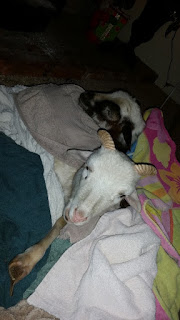 Our first couple hours at home were spent warming up the lambs.  I spent that night keeping the lambs happy and fire roaring.  The white ram lamb made it clear pretty quickly he was there because it was nice by the fire but it was freezing outside and the other lamb rested easier with him beside her. 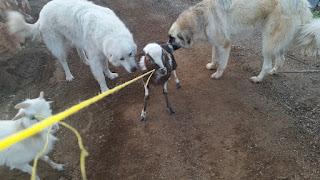 In the morning we took both lambs out for a walk to see how they would respond to being out in the cold and in their natural environment.  The ram lamb made it clear right away he was DONE with being cooped up and wanted freedom.  The ewe was still weak. 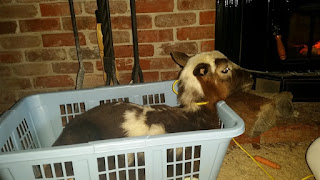 I spent the next 3 nights keeping the fire going and walking/carrying her around while I did my chores.  She was eating, drinking, and pooping well so we believed she was recovering. 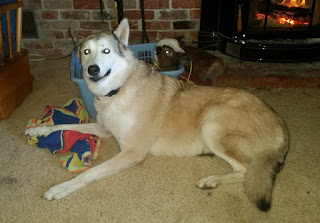 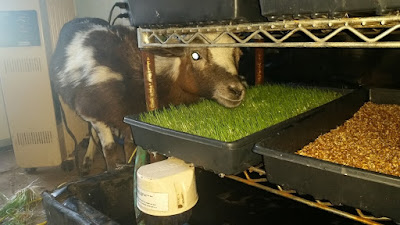 The fourth day she was ready to be out running around so we let her loose with the sheep.  A few hours later I could not find her.  While I walked the property looking for her the dogs would not come to  me finally I decided to get smart and look were the dogs were. 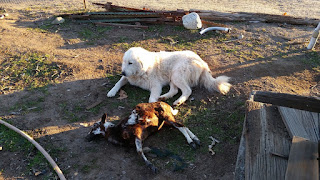 The dogs would not leave her even after she died.
A few days later the black and white ram fell into the pond and drowned.
I would find the Livestock Guardian Dogs putting the white ram into pens or corners and just laying down so he couldn't get away from them.  Now he is running happily with the rest of the sheep.