Monday morning we had a coyote in our tenants pasture watching me take care of the animals.  I called Teen Son, woke him up and asked him to get the gun.  He had some issues finding the gun he likes so ended up putting a few bullets in his pocket and one in his mouth.  We had communication issues so Teen Son ran around in the wrong pasture for a few minutes, the coyote got tired of watching me he jumped into our neighbors pasture.  Teen son finally saw it and was able to shoot at it and scare it but it wasn’t a gun he was used to so he missed.

Monday afternoon Teen Son got really sick feeling no fever but weird feeling and an upset stomach.  He stayed home from school yesterday.  This morning he is feeling much better, back to his cheerful self.  Then he tells me he must have swallowed a bullet because it came out in his poop.  I will be calling the Dr as soon as they open.
Posted by Unknown at 6:22 AM No comments: 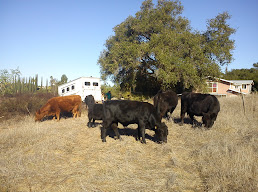 We picked up the meat from Fillet, the first Dexter Steer we have butchered.  This is the steer I was worried about not being properly neutered so we had him butchered before he would have hit maturity, he was smaller than I wanted him to be but I felt it was time.  I had sold 3 friends ¼ his meat each and have us keep.  A week before we were to pick up the beef one of our friends realized he didn’t have enough freezer space and backed out.  That shouldn’t have been a problem because we had turned friends down of Fillet’s beef.  Darling Husband forgot to check with the closest friend that we had turned down so as I was dividing up the beef Darling Husband was making phone calls.  I had planned on 75 pounds of beef going into our freezer not 150 so I didn’t want to keep extra.  One friend came and picked up her 75 pounds and I delivered another 75 to a friend and we loaded an ice chest with the rest hoping for the best.  Yay it sold!
Here is the break down on Fillet: We sold 225 pounds of grass fed Dexter beef at $5 a pound we earned $1125.  Purchase price is $500 + $533 for butchering and processing = $1033.  We came out $90 ahead and have 75 pounds in our freezer, except we fed him twice a day ($50 about month + $25 a month for fodder) , wormed him every 6 months kept him in water, fixed the holes in the fence he caused, hired someone to feed him when we were gone.  So I paid a little over $1000 or $13 a pound for my 75 pounds.

Once again I am not being a successful farmer dollar wise. 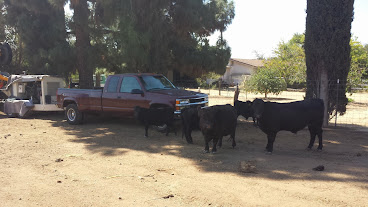 Fillet last month - he is furthest from the truck.

BUT the rewards of knowing we are eating healthy beef who lived a pretty happy life are priceless.
Teaching my children the lessons and values we are learning by raising our own beef – also priceless.
Hopefully as we continue our adventure we will have fenced our last pasture, be able to grow more fodder, possibly increase our cost per pound, and have a better system.  We are planning to butcher Minion in the spring he should be much bigger than Fillet was.


We had a chuck steak that we were eager to eat and so I only marinated it for about 45 minutes and it was the best steak I have ever eaten! 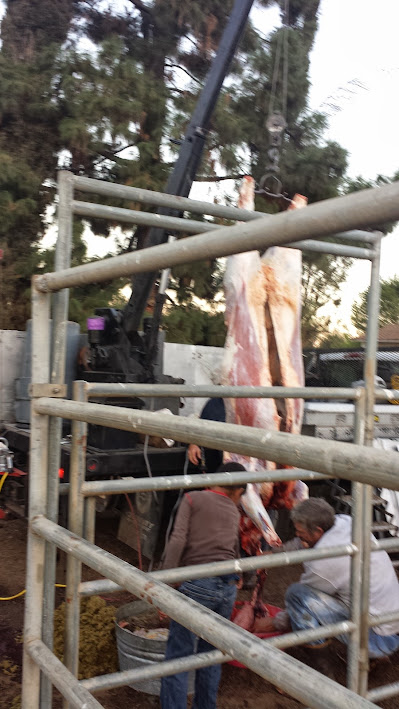 Stick boy was full of questions for the butcher.
Posted by Unknown at 9:59 AM 2 comments: