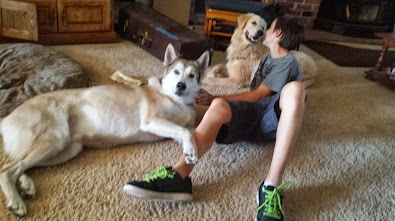 Luca has been with us 2 weeks now.  We are enjoying him so much.  I am amazed at how much calmer Luca is than any dog we have ever owned, even as a puppy Luca has a calm peaceful presence.  Dakota is always trying to get Luca to run and play.  Dakota really wants to play ball with Luca – Luca isn’t interested.  Very rarely Luca will want to play when Dakota is tired so Luca will grab a tennis ball and run past Dakota. 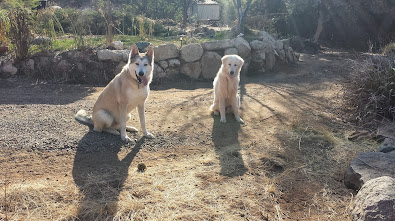 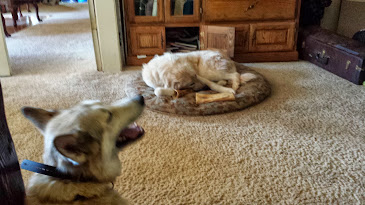 Luca has taken over Dakota’s bed and will sometimes take both of Dakota’s bones, Dakota doesn’t mind.  The dogs are really enjoying each other.  We let them play for a while every day.

Luca spends is sleeping in a crate by my bedroom, in the morning we go for a walk and take care of the rest of the animals.  Then Luca is on a cable by the sheep’s enclosure.  I let 2 sheep out each morning and the rest are in the enclosure close to Luca.  Some of the sheep stay close to Luca others wander off.  When I get home in the afternoon Luca and I walk around the property, I let the rest of the sheep out, Luca and I watch the sheep for a little while, then I let Luca run free until we put the animals away for the night.  I am not trusting Luca with the birds so the poultry are being kept in their coops.
Posted by Unknown at 10:43 AM 2 comments: